The town of Villefranche-sur-Mer seems to be rather mum on the subject of its most famous residents, the Rolling Stones. They lived there during the summer of 1971 in the Villa Nellcote, a mansion overlooking the Mediterranean, and recorded much of Exile on Main Streetwithin the seclusion of its iron grates. This was chronicled in folkloric, debaucherous detail in Keith Richards memoir, Life.

This morning, I climbed the hills to the villa, whose whereabouts I knew from another life and whose gates are now lined with thick nylon canvas to keep people like me from looking inside and imagining that summer. Okay, I felt like a bit of a trespasser, even though I stayed safely on the sidewalk. I can’t say it’s all about the music, although the music was something and I still know EOMS from start to finish. My mother used to go to the record store in town and pick out a few that looked worthy to pile under the tree for me and my 3 big sisters. The Christmas of 6th grade, I got Exile as well as The Harder they Come by Jimmy Cliff, which I think I traded for Something, Anything by Todd Rundgren with one of my sisters. Being more in the Beatles camp, with a father who played Joan Baez and Johnny Cash and siblings very much into CSNY, I could give or take the Stones’ music. But this record was something unusual, especially the acoustic side, with its underwater/country guitar riffs and searing vocals on songs like Torn and Frayed. Later, it would become the soundtrack for a lovely stretch of time during my senior year of college but for now (back then), I just liked it better than the Stones of Satisfaction.

The house sits on a quiet street, quite dignified behind the impenetrable security zone. It’s almost as if nothing ever happened there. I wonder how the house holds its history all tight like a secret? How does anything or anyone hold its history? 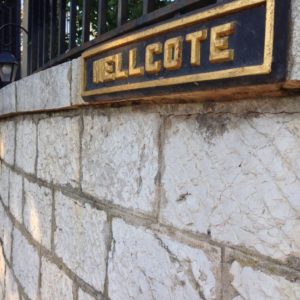 Me, in a Suitcase Restless Women at The Mount