Who Gets a Seat at the Table? (and other questions)

Recently my friend Michael Maren directed a scene in Brooklyn for his movie, A Short History of Decay, that fast became part of New York literary folklore. In this shot, Nathan (played by Bryan Greenberg who looks quite a bit like Channing Tatum) is a flailing writer, who is certain he’s a failing writer. His girlfriend (also a writer, but a successful one) is tapped out from his lack of confidence and has just shown him the door, so he escapes to Kos Kaffe, a coffee bar in Park Slope. With one excruciating gaze, Nathan sees the place stacked end to end with writers, real ones, famous ones, people with book deals and editors who care about them and bylines in the New Yorker. Is it real or is it fantasy? In either case, he senses he’s an interloper to a club where he has no business belonging. Cruel reality then deals him another blow: he sees that there is not a single seat left in the coffee shop. There is no room – there or seemingly anywhere else on earth, even a corner to weep into a lousy cappuccino – for the likes of him. It’s an achingly universal moment and when Michael let me read his lovely screenplay over a year ago, it touched me as a personal one.

It was great fun and the air was electric, aided by the coffee on tap the staff tirelessly churned out. But I wouldn’t be honest if I didn’t admit, as I sat with Jennifer Egan, Michael Cunningham, Roxana Robinson, Elissa Schappell, Philip Gourevitch, my dear friends Abigail Pogrebin and Dani Shapiro (who is married to the director), Kurt Anderson,Hannah Tinti, Jane Green and a passel of other writers, that I was infected with a large dose of Nathan-esque doubt. Mostly I asked myself: had I had I earned a place in their company? Yes, I’ve been writing all my life, but it’s been less than three years since my first real published piece – in Vogue, an essay about marriage – offered me a launching pad at last. I already had piles of rejection before then and since, I’m constantly finding new ways to define ‘disappointment’. Some days I do have to wonder: what’s the point? Who’s even listening? Seriously, folks. Does the world really need another writer?

What’s remarkable, though, is how quickly and reliably the buoyancy and rush can return. It takes a simple piece of good news in the Inbox – an editor who likes your idea or your voice or the essay you sent, cold, having mustered up all the courage in the world, crafting an e-mail with the perfect mix of self-deprecation and scorched-earth intrepidity. And sometimes I just peck out something for myself that no one may ever see and I revel in the sheer, magic elasticity of words. It can actually take the dark out of the nighttime, as Dylan said about a woman (but it can go for work, too).

I’m not sure if I’m a writer because I have something to say or I simply want to be heard, or if I just want to try to make gorgeous sentences because it’s so ridiculously satisfying. I do know that though every morsel of bad news ushers in a fresh episode of disappointment, these defeats are integral to productivity. This is the truth: they get me in my chair every day. My husband is a sculptor who has lots of wisdom and even some useful bromides. My favorite is: you’ve only failed when you stop trying.

I would guess that most every writer in the café has, at one time, seen failure, experienced bad reviews, or been set back by a crisis of confidence. I wouldn’t be surprised if someone among them, from whatever rung on the success ladder, might have thought him or herself lesser, in comparison, than someone else across the room. I’m still eager, sometimes anxious, for one of my books to be published. Where does that put me on the spectrum? And really, does it matter? I suspect that there is a little Nathan in everyone (or most everyone) in the coffee shop that morning. It was, after all, just a room full of men and women, working hard, moving forward with the next big idea, unwilling or unable to rest on laurels if they’re lucky or talented enough to have earned them. Poor Nathan was having a bad day in that scene – the kind we all endure. I wonder if any of the authors on the movie set that morning might ever have their own dark, irrational moments, where even they might question if they belong at the table.

It is an honor to read with this evening with my fellow authors Abbie Kozolchyk, Ann Hood and Carol Reichert at Newtonville Books, one of the great bookstores. 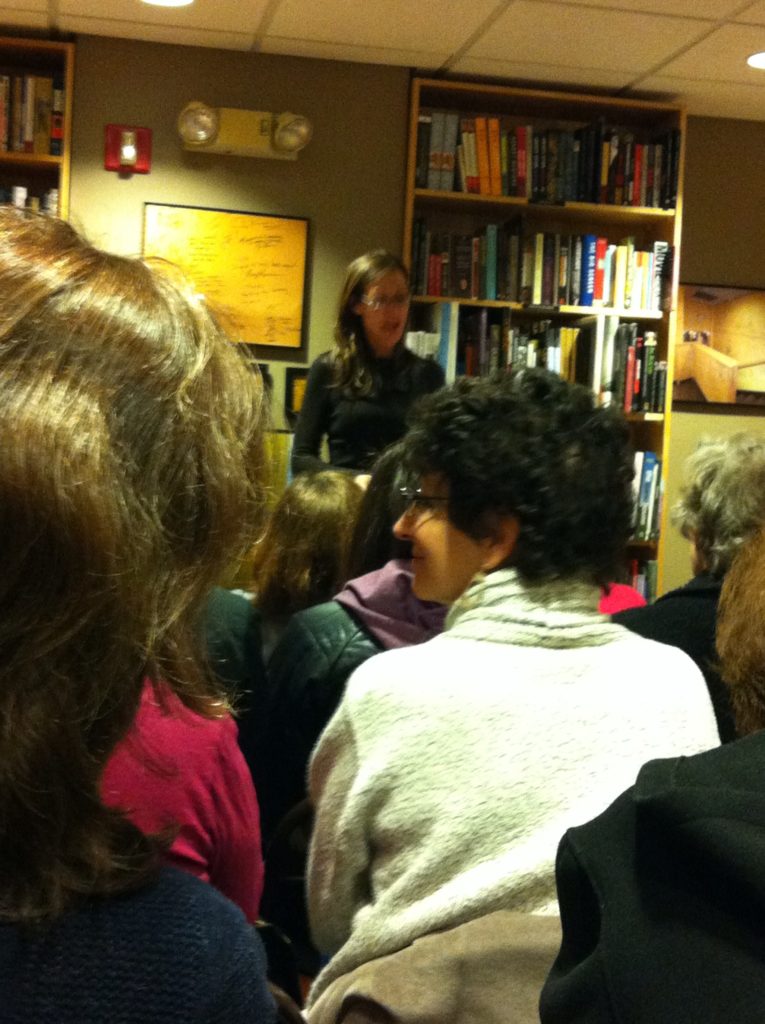 After the fact: And here is a picture of me at the reading, taken by my friend Pam. That’s my Mom on the right, with the gray hair. I’m glad to do a reading close to my home town.