Today through Monday November 3, you can enter for the Goodreads Giveaway for a copy of 100 Places in France Every Woman Should Go.

On Writing a Book About France 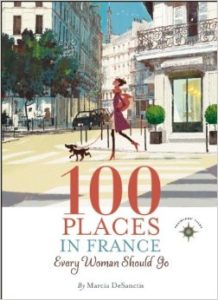 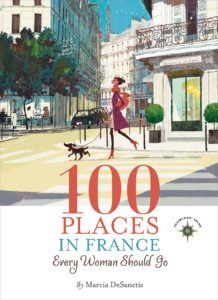 No sooner had I handed in the manuscript for 100 Places in France Every Woman Should Go that I finally had a much-postponed lunch with an old friend. I had not seen her throughout the several months I spent in a dark cave writing, and behind the wheel of a little Citroën in France, researching this book. I filled twelve Field Notes books with scribbles, sprigs of rosemary, splashes of café crème. In my office, I closed the drawer full of them for the last time. I was – happily – done.

I’m not sure how this woman escaped my radar, since I had canvassed literally dozens and probably more accurately hundreds of people, mostly (but not all) friends (but all of them friendly), for their ideas on France.

“Great news about the book.” she said. “I hope you have a chapter on La Rochelle.”

Two weeks later, I was at a cocktail party, chatting with an acquaintance, who repeated that sentiment. “You know my favorite place? La Rochelle!”

La Rochelle is an idyllic city on the Atlantic coast, edged with medieval towers, through which weaves a web of arcaded sidewalks. It is also where you take the bridge over to Île-de-Ré. Which is in my book. La Rochelle is not.

These conversations happen often, practically every day. I like them. Lists are random events, and there are many more than 100 places for women to go. Doubts are part of the writer’s psychic landscape, and this book has given me my share of them. Why did I choose a tiny absinthe bar in Antibes for a chapter, and not the gemlike town of Uzès? The latter is an up-and-comer, the “new Aix-en-Provence” as it’s been described to me, and many people have asked – hoped – it is included in my book. It is not.

Sometimes, I wish my editors had assigned me a book on 200 places. Even 1000 places would have been easier than culling this magnificent country down to a mere 100. But the list had to be an even 100 and every one of them had to have a reason and purpose. I hope you will see a line that threads among the narratives and stories in this book. Each of the 100 had to be somewhere I love, or involve an activity that I seek. Hiking, for example. Searching for beauty. Eating chocolate. Finding stillness. Drinking rosé in the middle of the day. The 100 also had to include those places where women made their mark, cast their shadows or shed their light. There are thousands in France. Hence, the absinthe bar. This was a chance to tell the story of this potent spirit, so crucial to French creative life in the late 19th century, and women’s great role in selling it, drinking it, and even abusing it.

There are a lot of memories in this book, and I’m lucky to have a lot of them of France. It would not have been possible for me to write this book without my own extensive history there. I went through diaries, photos, documents. I found the leasing agreement for our second apartment in Paris, on the rue du Pont aux Choux in the Marais. I always pass by that apartment building when I’m in Paris. Now, there is a super chic lingerie boutique called Odile de Changy across the street. Both the old apartment, and the new shop are in my book.

One final word about putting this book together. I kept a list of words and expressions I wanted to avoid, and added to it frequently. I may have overused the adjectives “dazzling”, “gleaming” and definitely “gorgeous”, but I avoided the term “City of Light” as a euphemism for Paris. To me, it is the city of dreams.

And here are two links to buy the book:
Indiebound and Amazon