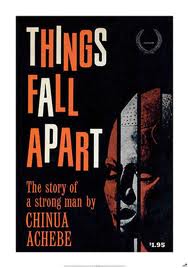 During a classroom visit at Parent’s Weekend at my daughter’s school, I was stunned and delighted to see the kids in freshman English reading Chinua Achebe’s masterpiece, Things Fall Apart. They were dissecting passages, underlining the various authorial devices, executing a critical read of this story about village life and British colonial rule in Nigeria. They looked upon the book as literature and language, as fourteen year-olds should do. But it’s the history contained in the narrative – the actual context – that made me want to read it again, after many years.

The day before Parent’s day, I had returned from two weeks in Rwanda. so Africa was very much on the jetlagged brain. It wasn’t my first trip there, but I went deep this time, and splurged on a driver (but not really hotels) to ferry me to all corners of the tiny country, while doing some consulting for a small and brave NGO. To prepare for my trip I re-read Adam Hochschild’s mindblowing book about the Belgian conquest/rape of the Congo, King Leopold’s Ghost.  It reads like a novel, but every word of it is true.

While in the town of Gisenyi, I walked the short distance to the Congo border, with the country’s brutal and sometimes incomprehensible history (so recently brought to life for me by Hochschild)  in mind. I wanted to cross over to Goma for the afternoon, but the charge for a visa recently went up to $300. Cash. The volcano, Nyiragongo, hovers menacingly over the city it destroyed in 2002. At night, it’s even more beautiful and terrifying, as it glows red, spewing fire into the sky.

The walk to the border provides lots of quaint architectural reminders of the region’s German, then Belgian-dominated past – rambling stucco or wood houses, all in European style. I don’t know who lives there now – Europeans, wealthy Rwandans, but they are quite beautiful, and well-preserved. It’s a country where 92 per cent of the population is Catholic or Protestant, and where most people in Kigali speak French. Colonial history lingers everywhere; it’s inescapable.

Days later, back home, while flipping through my daughter’s book in her classroom, I came across this passage, written in 1958 about characters in 1890’s Nigeria:

“We have heard stories about white men who made the powerful guns and the strong drinks and took slaves away across the seas, but no one thought the stories were true.”

It’s still impossible to wrap the head around. – the mingling of such disparate cultures, the wholesale replacement of  local sovereignty, the forced introduction of the Christian god. But it’s important to be reminded – in fiction and in non-fiction – of a history that, unless you’re in Africa, is often overlooked.